Medieval 2: Total War Kingdoms has 4 new campaigns, each one focusing on a different area. Each new campaign must be individually installed and the entire expansion pack takes up around 4 GB of hard drive space. Please note that when the factions list below states that a certain faction is non-playable then this applies ONLY to the Campaign game. You can play a quick game or a custom game with all the factions included.

The Americas campaign is set in the early sixteenth century, covering the early period of European colonisation of Central America. The Europeans must struggle with exploring an unknown land filled with violent natives, whilst the Native Americans attempt to stall foreign invasion whilst simultaneously expanding their own lands at the expense of their neighbours. 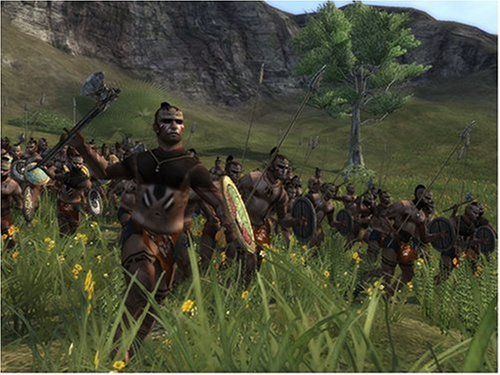 This campaign implements the various conquistador armies that went to the new world by spawning large, formidable armies in the Americas with allegiance to New Spain. Once spawned, the New Spain faction can use these armies however they see fit. French and English forces will show up in the same way: the French in North America and the English in South America and Panama. 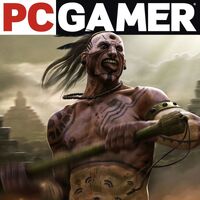 Also, when playing as New Spain, as the player progress through the campaign, they will be presented with missions from the King of Spain, and when sufficient influence is gained, the player may be granted a higher title of nobility, such as Baron, Count, etc. These titles unlock more advanced building levels for the player to use.

All of the factions that believe in the Sun God are able to sacrifice units instead of disbanding them. They can also sacrifice populations upon capturing a settlement or they can sacrifice captured enemy troops. Sacrificing upholds the religion of the Sun God and increases the happiness of your people.

At the beginning of the Britannia campaign in 1258, the British Isles are in chaos. The Kingdom of England exercises influence over most of the Isles, but its power is contested from several theaters. In the far west, on Irish soil, England tenuously holds a network of fortresses that keep the Irish at bay. However, the chieftain Brian O'Neill has succeeded in uniting the Irish, and despite their lack of heavy infantry and financial difficulties, with a strong push they may seize the island. On the Marches, the Welsh have also been united, by Prince Llywelyn, who threatens the lightly held English border fortresses and rules over a people who simply refuse to be subjugated. In the north, the English are allied with the fierce Scots, but this bond is untenable, and the only remaining question is when war in the Highlands will erupt. Finally, the warlike Norwegians are returning to the Isles, having held the Isle of Man and the Hebrides for some time, their king coming personally to oversee the conquest of Britannia. England is the largest and richest faction in the isles, however they are very thinly spread, and incursions into their territories from the Welsh, Irish and even perhaps the Scots or Norwegians, seem inevitable unless action is taken. Perhaps worst of all, dissent smolders within its own borders, in the form of the English barons, who threaten to unify into a full-fledged rebellion. Time will tell who can come through blood and iron to unite Britannia.

The presence of permanent stone forts placed in strategic locations (which can be garrisoned and provide free upkeep for a small number of units). These structures can hold out for a brief time against sieges and are automatically repaired after each battle.

Certain units can only be trained if that faction's culture is high enough in a settlement making expansion into conquered land more difficult. Culture has replaced religion in the game, and priest units are unavailable in this campaign.

A special, unplayable faction - The Baron's Alliance - similar in gameplay terms to the Eastern and Western Roman Rebels from the game Rome Total War: Barbarian Invasion. When characters, armies and settlements under English control rebel against their faction's control, they will become part of the Alliance, a faction with essentially the same strengths and weaknesses of the original faction, including the ability to utilize diplomacy and assassination to achieve their goals.

Every faction gets paid an additional amount of florins every turn. This payment is referred to as 'The King's Purse'. In Medieval 2: Total War some factions had a high king's purse payment every turn and some had a low payment, however rather than have a fixed king's purse, each faction in the Britannia Campaign has a Dynamic King's Purse- the sum of money you are paid every turn can change.

A number of special historical figures, including King Haakon of Norway, King Edward I, Prince Llywelyn of Wales, High King Brian O'Neill, and William Wallace, appearing either at the start of the campaign or at some later point. Though they lack the special abilities of the hero characters from the Crusades campaign, they are usually accompanied by a large army.

Beginning in 1174, the Crusades campaign is set several years prior to the outbreak of the Third Crusade, continuing into the Fourth Crusade and beyond. It follows the Kingdom of Jerusalem and Principality of Antioch as they attempt to strengthen the presence of Christendom in the Holy Lands, whilst the Seljuk Turks led by Nur ad-Din Zangi and the Egyptians led by Saladin attempt to drive them out. Meanwhile, the Byzantium led by Emperor Manuel Komnenos slowly moves into the middle east to regain its lost glory, and attempts to drive back the armies of the Turks as well as deal with the rebels and the Venetians that harass them in the west. This scenario contains many historical inaccuracies. These include the fact that Nur ad-Din died in 1174 (the starting date for the scenario) and was actually succeeded by Salah al-Din (Saladin), the substantial enlargement of the Principality of Antioch to include areas that should be under Muslim control (such as Aleppo and Edessa), and the combination of Seljuk Turks of modern day Syria, Iraq and Jordan under Nur ad-Din with the Sultanate of Rum and the Danishmend Turcomans of Anatolia to form a unified group.

Generals in the Crusades campaign have the ability to construct permanent forts that remain even after vacated by troops.

The Principality of Antioch and Kingdom of Jerusalem may make use of the Knights Hospitaller and Knights Templar orders, respectively, thus giving them access to unique units - of whom only one of each may be present on the campaign map at one time.

Each of the five playable factions owns a single region designated as a 'Power Centre', with the loss of these centres dealing a major blow to that faction. For example, the loss of a faction's Power Centre will prevent the recruitment of certain troop types. Should a Power Centre be lost, reinforcements will often be sent to assist in recapturing that settlement.

Each playable faction has access to a single 'Hero' character, these powerful individuals possessing special abilities capable of turning the tide of battle.

Starting from the date 1250, the Teutonic campaign centres around the conflict between Christianity - spearheaded by the Teutonic Order - and Eastern European Paganism - represented by Lithuania. The Teutonic order are ruthless and are a threat not only to the Pagans but to the other countries also. Novgorod lies in the far east of the Baltic area and guard their rich city jealously. They have triumphed over the Teutonic Order in the past, but since then the Order has been rapidly expanding. Novgorod must build up their forces if they want to survive. The Duchy of Lithuania is desperate to drive off the Teutonic Order. If they want to be victorious, they must make use of their thick forests and quick forces to drive out the Order. However after much pressure from many of the Catholic factions the path of Catholicism may be inevitable for Lithuania. Lying to the west, the Danes hope to unite Scandinavia and from there launch attacks on the rest of the Baltic area. However, the mighty Holy Roman Empire lies directly to their south, and the Danes must make good use of their mass fleets if they hope to defeat their many enemies. As the Teutonic Knights' campaign against the Lithuanians continue, the Kingdom of Poland just to their south, having originally requested the Knights to deal with Lithuania, regret their decision, seeing the destruction brought by the Knights. wanting to right their wrong, they turn on the Teutonic Knights and wage war on them.

Crusading nobles, drawn to the conflict against Paganism in search of fame and glory, will request the assistance of the Teutonic Order in return for donations to the Order's coffers. The size of the donation varies depending on the nobles' successes. The Lithuanian leader will be rewarded by his council of nobles in the event that he should manage to kill any of these crusaders.

When playing as Denmark, it is possible for you to form the Union of Kalmar. In order to do this you must first take the Scandinavian settlements of Kalmar, Göteborg, Visby, Uppsala and Åbo. After taking control of these settlements you must then kill the Norwegian king, either through assassination or a direct battle. Note that if you eliminate the entire Norway faction it is impossible to form the union. After forming the union, Denmark will take on a new banner, gain access to all the existing settlements and armies of Norway, including its generals and agents and unlock the ability to build three new units.

Early in the campaign an event will herald the formation of The Hanseatic League. The League consists of five specific regions on the campaign map that represent the group's most important assets. The faction controlling the most of these settlements has the greatest chance to be offered the option of building the Hanseatic League Headquarters - a unique building that provides significant financial rewards.

Features of the Teutonic Order

Due to the unique nature of the Teutonic Order, it lacks a family tree - thus leaving princesses and certain diplomatic options closed to them but making the faction less vulnerable to assassins. Instead it is led by a Hochmeister, who, upon death, will be replaced by the most able General among the order's ranks.

Finally, the Order's best units can only be recruited in heavily Catholic areas. Recruiting units such as Christ Knights, Halbbruder and Ritterbruder thus requires an extremely high percentage of Catholics to be present in Teutonic-controlled regions.

The Teutonic Order's strength is in its powerful heavy units. While lacking in speed, the Order's units more than make up for it in very powerful defensive strength.

Lithuania starts out as a Pagan faction, offering it the chance to utilize a number of powerful and unique units to make up for its technological shortcomings. There are a number of different building options in a settlement that allow the faction to devote temples to three different Pagan deities. However, whilst following Paganism, Lithuania is unable to advance settlements beyond City or Castle level. 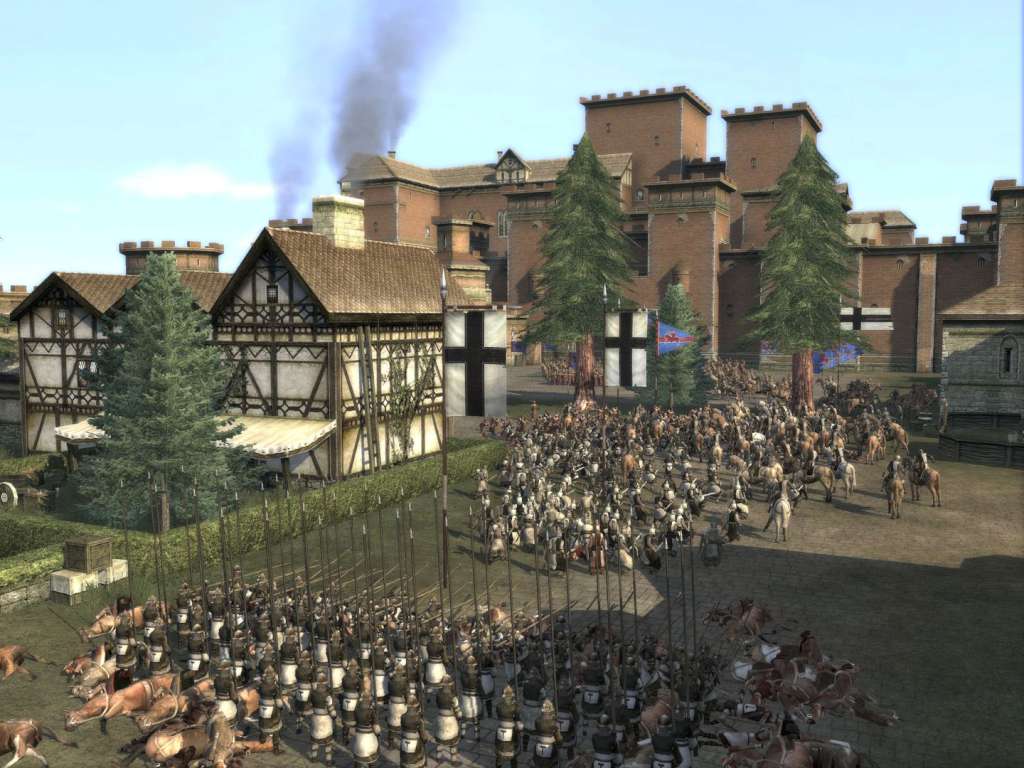 At some point during the campaign, Lithuania will be presented with the option of converting to Christianity. Whilst this can cause significant unrest and will force the faction to remove any Pagan-specific buildings, units and agents, it will also unlock new building options and make Lithuania a less tempting target to the Christian factions that surround it.

The Minimum System Requirements are as follows:

The Recommended System Requirements are as follows:

YOU can help us improve this Wiki! ~ Look for Ways to Help and Things to Do. ~ If you need further advice, please post here.
Retrieved from 'https://wiki.twcenter.net/index.php?title=Medieval_II:_Total_War:_Kingdoms&oldid=80339'