The first Colibri lighter was produced in 1928, but the founder of the firm, Julius Lowenthal had joined a firm specialising in 'smoker's requisites' in 1910 when only 18 years of age. He was therefore involved with lighters almost at their inception. After the First World War, he formed a company with his brother Benno, J. & B. Lowenthal (JBELO),
JBELO
and in 1927, Julius perceived the idea of a lighter which would avoid the thumbs direct contact with the flint wheel. Thus what was known as a COLIBRI ORIGINAL was born.
COLIBRI ORIGINAL
As often with lighters, technical difficulties had to be overcome, but the lighter became a huge success, and some COLIBRI Original’s are still giving excellent service to their owners. In the 1930s the company obtained a patent for a fully automatic lighter which virtually guaranteed ignition every time - the , the first made in Switzerland as were the 'Originals'.
At about that time (1933), Julius Lowenthal moved from Germany to London where he established Colibri Lighters Ltd. His brother Benno, who had previously moved to Switzerland, also followed to London to form his own lighter company BENLOW. Their sister Meta remained to manage the Company in Germany (IBELO). Colibri lighters in London and IBELO in Germany were able to resume working together in 1945.
In the post-war years, Colibri had its own Development Dept. and there began a series of technical developments which have produced and still are for that matter, a while range of exciting new lighters.
In 1955 saw the first Colibri Gas Lighter. This was produced in France where the knowledge existed and combined French advances in butane gas tanks and precision mechanism of the Colibri Monopol.
COLIBRI MONOPOL
Out came the Colibri Monogas in a variety of finishes and a number of action improvements. 1958 also saw the first visible multiple gas refill by Colibri and in 1963 the Colibri Autoflint which insured regular pressure.
Colibri Autoflint
In 1961 Colibri invented the Piezo Electric lighter and it took many years to perfect the Piezo system which was marketed in 1967 under the name COLIBRI MOLECTRIC 80,
INSERT COLIBRI MOLECTRIC 80
itself suspended two years later by the COLIBRI MOLETRIC 88, still one of the most reliable, practical and elegant of lighters.
COLIBRI MOLETRIC 88
For the students of ‘such events’, it is worth noting that in the James Bond film ‘The Man with the Golden Gun’, it was Colibri who produced the highly ingenious golden gun which was assembled from a Colibri 88, cigarette case, cuff links and a fountain pen.
Further developments followed. It has always been difficult for example to produce a fully-automatic model totally smooth in appearance. Colibri solved the problem and in 1967, the first models on sale were the COLIBRI MONOMATIC and COLIBRI TETRA.
INSERT COLIBRI MONOMATIC and COLIBRI TETRA.
These two versions were replaced by the COLIBRI L’AMBASSADEUR and COLIBRI ENVOY and by the COLIBRI SUPERTRONIC, a luxurious battery model, paving the way to the long slim lighters popular today.
INSERT COLIBRI L’AMBASSADEUR and COLIBRI ENVOY and COLIBRI SUPERTRONIC
The next step was to make a lighter that required no moving parts for ignition. The answer in 1977 was the COLIBRI SENSATRON, operated by the merest touch.
INSERT COLIBRI SENSATRON

This year (sic 1982), two new models were presented and offered a double ‘presentation’ in that Colibri had sealed an agreement with COMOYs / ORLIK for the distribution of Colibri Lighters in the UK.
The first is the COLIBRI JETRIC 10 which represents a totally new and convenient way of achieving a closed lidded lighter. Instead having to lift the lid with the thumb and moving it to operate the actuator, the Jetric system releases the lid which swings open from the top of the corner of the lighter. It is a very fine lighter in a number of beautiful finishes and it sells in the shops from £14.95 to £19.95 (sic 1982), excellent value.
INSERT COLIBRI JETRIC 10
Colibri describe the other model, the COLIBRI LASATRON as the first truly ‘Space age Lighter’. In this, the ignition has been further simplified: having opened the lid, the beam is sent across a recess onto a photoelectric sensitive cell. To ignite the lighter, one just passes one’s finger across the beam. This is really keeping up with the microchip technology. Available in highest jewellery standard finishes, the lighter retails between £39.95 and £57.50.
INSERT COLIBRI LASATRON
Looking through the Colibri range, we find no less than 20 different models, some in six finishes, representing over 100 ‘combinations’. While most models are suitable to light a pipe, pipe smokers are not overlooked. Out of two models, the PIPEMAN and the PIPER, we found the PIPEMAN more interesting. With a side-wheel action it is a ‘traditional’ design, made out of solid brass, long in the modern way and a good capacity tank. The flame comes out sideways and can easily be controlled. It holds simply in one hand and therefore very useful when the other hand is otherwise engaged.
INSERT PIPEMAN and the PIPER
There are four finishes including a very attractive wood grain and at around £14 to £15 are excellent value and judging by the way they are made will give long service.
We mentioned earlier the COMOY / ORLIK distribution tie-up with Colibri. The directors of both companies are certain that this will be a correct step which should enable Colibri to become the leading brand in the UK.

Colibri is a company that specialises in men’s accessories. Now established for over 83 years, Colibri is traditionally known as a lighter manufacturer. Since its inception, Colibri has developed its existing line of products, which have come to include: lighters, jewellery, smoking accessories, small leather goods and writing instruments.

Vintage cigarette lighters are among the most popular collectibles today, both for their aesthetic value and brand associations. There are two different form factors available: table top and pocket lighters.

First invented in 1823 and then improved in the 1880s, pocket cigarette lighters became as common as keys or wallets by the 1930s. The three basic types of vintage lighters include manual (flint and wheel spark ignites a wick or creates a flame above a gas valve), semi-automatic (wheel also opens the fuel source cover), and automatic (requires only a button push).

The first lighters were called strike lighters and were similar to matches. Users would scratch a flint with a wand with a hard metal tip and a wick at the end. It would create sparks, which would ignite the wick, which was soaked with fluid.

By the 1920s, lighters had become functional as well as artistic with the advent of the semiautomatic lighter, where the user flips open the lid and a flint wheel simultaneously spins and ignites the wick. The automatic lighter was created by Louis Aronson (founder of Ronson lighters) in 1926. Ms office for mac free. It requires only the push of a button to create the flame, which stays lit as long as the button is held down. Up through WWII, most lighters ran on Naptha, a petroleum mixture. After WWII, Naptha was replaced by compressed butane.

Early electric lighters were made of ceramic. They plugged into a house element and the bottom would get hot.

To attract women in the 1930s, some companies (especially Ronson) created lighters that combined various elements, such as cigarette cases and compacts, and addedrhinestones or enameled designs.
Lighters come in a wide variety of shapes and sizes, from slick, elegant designs to novelty items, such as lighters that look like lipstick cases or little TV sets. Some lighters incorporate materials from notable manufacturers, such as glass from Laliqueand china from Lenox. In the 1930s, '40s, and '50s, Ronson produced the Ronson Master Pack, which combined a lighter, cigarette case, and watch.

Colibri was founded in 1928 by Julius Lowenthal. His primary aim was to re-invent the lighter market and to produce an automatic lighter. He succeeded by inventing the semi-automatic lighter. In 1935, Colibri launched the fully automatic ‘Monopol’ lighter; engineered with a Swiss acceleration system. From 1940 and until 1945 Colibri launched the ‘Stormgard’ lighter designed for soldiers fighting in World War II. In 1952, Julius Lowenthal’s son Jack, joins Colibri. Technological advances in 1958 led Colibri to produce a lighter with a visible multiple gas refill and a hydraulic auto-flint system. Colibri released the electric lighter in 1967 and named it the ‘Molectric.’

In 1974, the James Bond film ‘The Man with the Golden Gun’ Colibri supplied the golden gun; constructed from a Molectric 88 lighter, cufflinks, cigarette case and fountain pen. Later in 1974, Colibri sponsors the RAC rally team driven by Henry Liddon and Timo Makinen.

In the 1980s, Jack’s son David joins Colibri which led to the expansion into lifestyle accessories from Swiss watches to cufflinks and pens. In 2001, the Vortex and Trifecta collections were introduced with pyramidal twin-flame and triple flame lighters.

In February 2009 Colibri changed ownership with its head office changed from Providence to New York, USA. They proceeded to relaunch the brand which included three new series to distinguish between products; The Classic (C Series), Design (D Series) and Technical (T Series)

The original 1928 Colibri logo featured simple, bold typeface and later incorporated flames to dot each ‘I’ in the word Colibri. The logo later included an emblem of a lion breathing fire and a simple hummingbird outline. The logo symbolised ‘Lowethal’ (the founder of Colibri) and literally translates in to Lion.

To signify the re-launch of the brand, in 2011 the Colibri logo was re-branded and incorporated a monochrome humming bird symbol (as ‘Colibri’ is also a breed of hummingbird.) Similarly to the small and detailed nature of the hummingbird, this aesthetic is reflected in Colibri’s products. The design of the logo coincided with the brand re-launch and has a sharper design to reflect the 2011 collection. 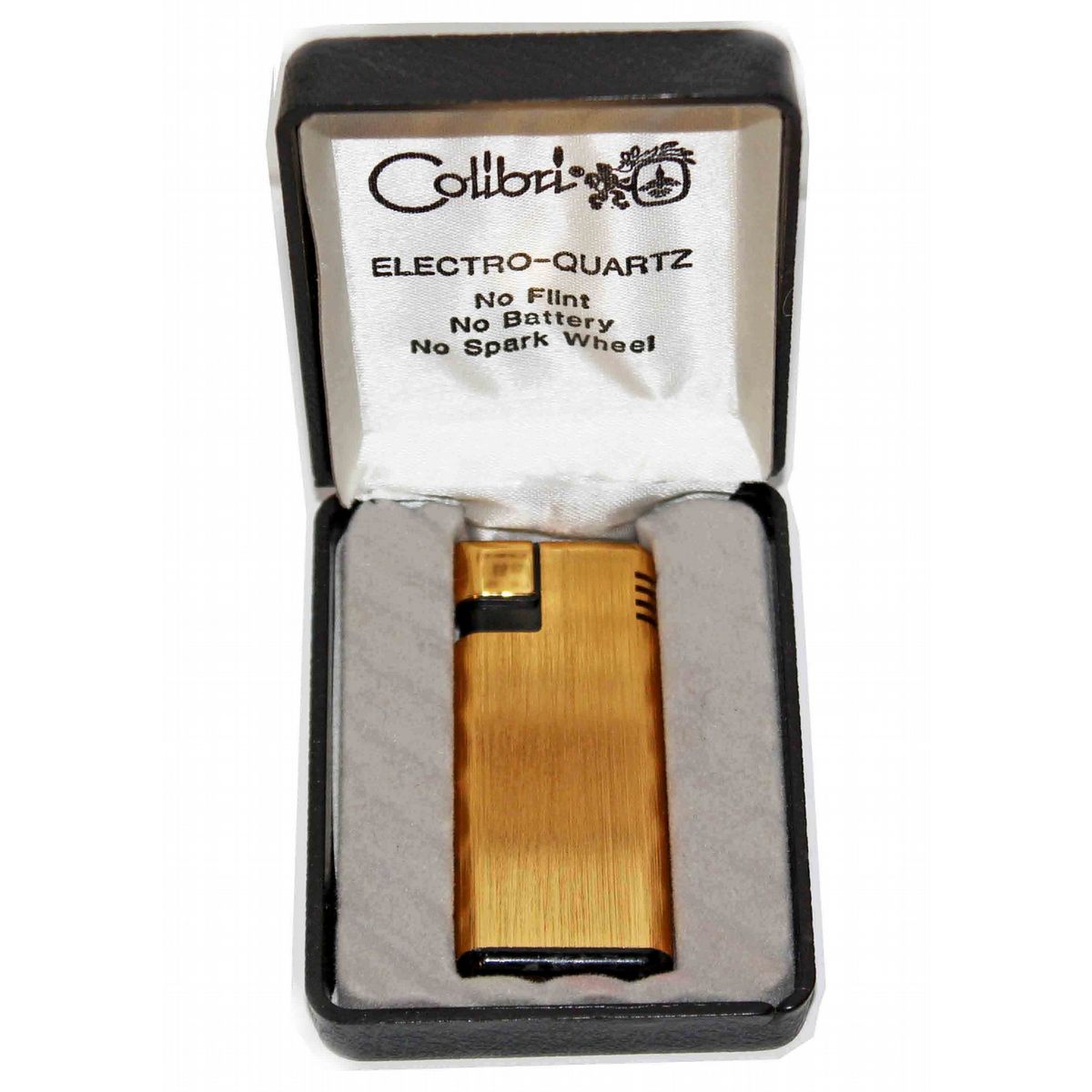 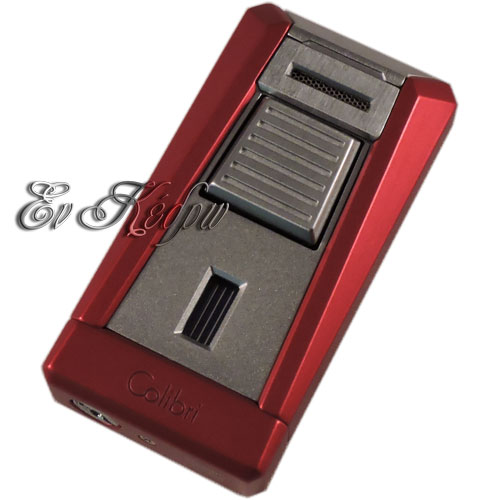 A vintage Colibri lighter and cigarette holder sold for $25 at a Gulfcoast Coin & Jewelry auction in December 2010.

A Colibri Monopol gold plated lighter set with a 17 jewelled Swiss watch movement to the face sold for £30 at Eastbourne Auction Rooms in November 2006.

A S.T. Dupont and a vintage Colibri cigarette lighter sold for $100 at Damn Yankees Auction in January 2013.