For your consideration: a sound exploration classic appears on the computer screen, with all the capabilities of the original and even more possibilities.

Since the death of Donald Buchla, software emulations of his modules and systems have become available. Softube released an authorized copy of the 259e Twisted Waveform Generator a couple of months ago ( https://soundbytesmag.net/review-new-modular-expansions-softube/ ), and a number of the plugins for VCVRack.com feature emulations of some classic Buchla modules. Now Arturia have joined the party with the Buchla Easel V, an emulation of the classic Buchla Music Easel synthesizer. The Music Easel was a small monophonic semi-modular synthesizer where connections between modules could be made with a small, but elegant, patchbay, and an array of switches selected control sources for modules and output routings, making the synthesizer much more flexible than many other small systems. 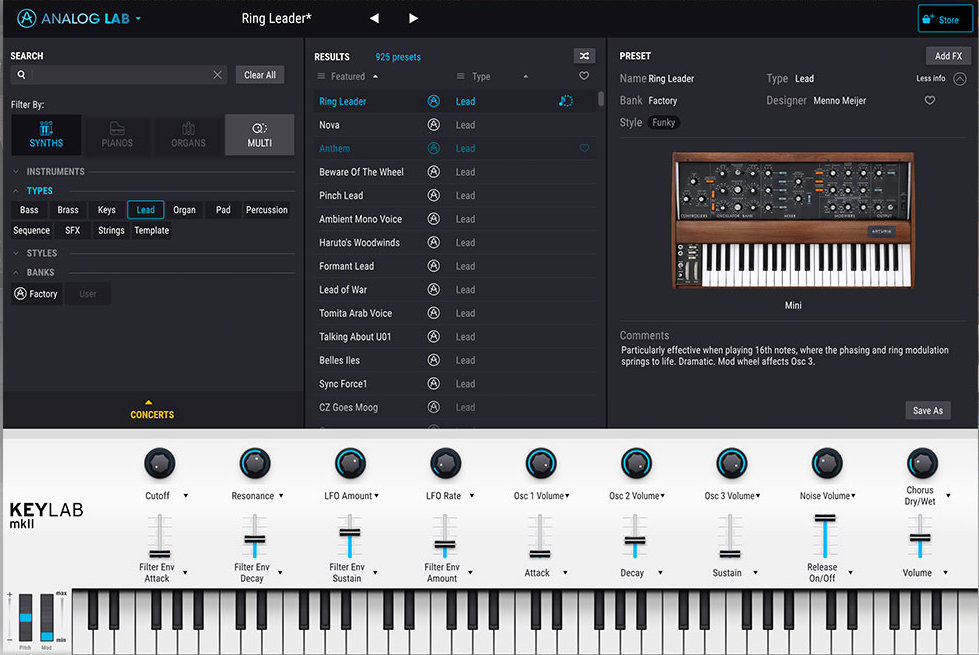 A synthesizer dichotomy has arisen in the past couple of years – “East Coast Synthesis” vs “West Coast Synthesis.” East Coast refers to Moog-type subtractive systems, and West Coast refers to systems with Vactrol-driven VCF-VCAs, and waveshapers, among other modules, such as Buchla and Serge systems. As someone who was around during those days (the late 60s, the 70s and the 80s), this dichotomy is news to me. I used all of these synthesizers, and then some, and what seemed more important to us at the time was simply using each machine for its unique capabilities. (This historical-term-as-irrelevancy has been around for a long time – any composer from between 1600 and 1750 would be very offended if you called their music “Baroque,” Debussy, Ravel and Satie detested the term “Impressionist,” and Terry Riley, Steve Reich and Philip Glass all reject the term “minimalist” to describe their music.)

But advertising is its own language, which often has little relationship to any idea of historical truth. That being said, Don Buchla’s designs were unique, and he was continually interested in making systems which furthered sonic exploration, rather than commercial acceptability. I remember working with the Buchla system 100 – we had a system at the University of California, San Diego that had two or three of his touch-sensitive keyboards which were marvellous and flexible devices which didn’t function like traditional keyboards, but which opened up lots of possibilities for finger-based sound control. In the 90s, I had one of his Lightning controllers, in which infra-red light generating rings were worn on the hands (or affixed to other parts of the body) which triggered off a whole variety of MIDI signals, making motion-control of MIDI synths and samplers a practical reality for the travelling gigging musician.

The Music Easel was one of these exploration-oriented systems. It encouraged experimentation, and offered just enough resources, given its compact size, to make a huge variety of sounds. Obviously, if you’re interested in a standard palette of commercially usable sounds, you needn’t look here. But if you’re interested in a system that you can explore, and grow with, then you’ll want to have a serious look at the Arturia Easel V, seen just below (click on image for more detail).

A quick look at the faceplate of the machine shows its capabilities. Across the top strip are a number of controls which access a large variety of presets that come with the machine, or allow you to save your own. As well, there is a size control here to resize the GUI to match the abilities of your screen. Two arrows at the right top corner give you access to a series of new control signal generators Arturia has added to the machine, which increase its abilities considerably (more on these later). Then a MIDI jack symbol allows you to set up MIDI automation control of every knob and switch on the front panel.

Left to right in the main body of the instrument are a series of modules. These are divided into a series of switches at the top, with control sliders below them, and a patch panel below that. At the far right of this section is the output section, which has a number of controls for sound production and processing. Below this occupying the entire bottom half of the instrument is the keyboard / arpeggiator / system clock / preset voltage source, a very complex module with a massive amount of capabilities. The original Buchla keyboard was touch-sensitive – that is, a voltage was given out based on how much of the key your finger was covering. This keyboard doesn’t do that, even on touch sensitive screens, but if you have a keyboard controller with aftertouch (mono or poly), you can access that aftertouch signals through the purple jacks in the patchbay. At the very bottom of the instrument is a smaller panel with polyphony controls (the machine can be set up to be up to four voiced polyphonic), a MIDI channel selector, a Panic (All Notes Off) button and a CPU meter. This IS a rather CPU hungry beast. I ran the machine on two systems to test. A smaller computer, with an i3 Processor, Win10, at 3 voices, had 80% CPU usage. A slightly larger computer, with an i5 Processor, Win 8.1, at 4 voices, had 80% CPU usage. Four voices on the i3 machine occasionally overdrove the machine, but three voices was just fine. This picture shows the keyboard with the polyphony and other controls at its lower right. 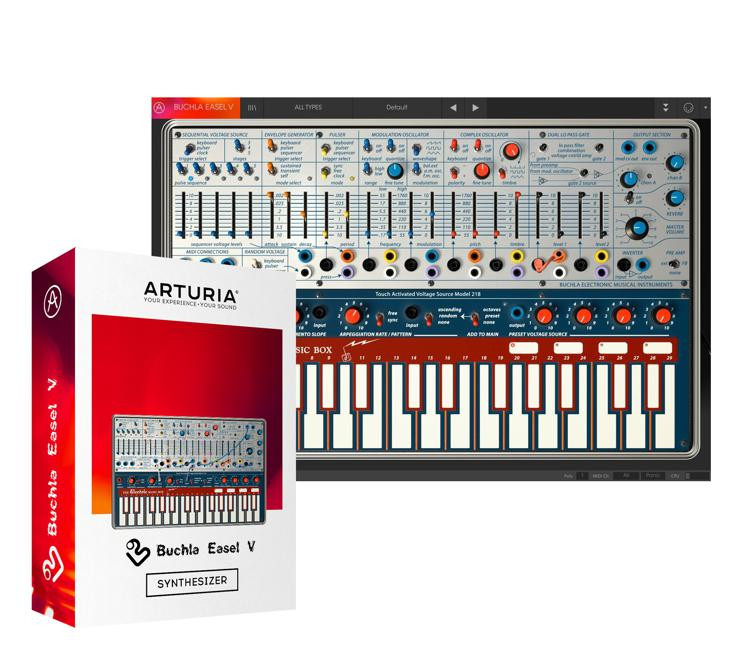 Left to right, the modules are:

– A five step sequencer, which can be controlled from a number of sources and can be set to a number of rhythmic patterns.

– A pulser, which can be used as an auxiliary LFO, or an AR envelope generator, or a rhythm pulse source for other modules. This shows the flexibility of the design very well – each module can usually do double duty for a number of functions.

– A modulation oscillator, which can be controlled from many sources and which can be used to modulate the main oscillator, or can be ring modulated itself with an external signal. This oscillator can also be routed to the output to be heard as a separate sound source, if desired. It can be controlled by an external MIDI keyboard, or the MIDI keyboard can be turned off and internal control voltages can control the pitch in any desired stretch or compression of the pitch spread.

– A complex oscillator, which has a basic sine wave at one end of its timbre control, and one of three waveforms at the other end. This timbre change is produced by a very elegant waveshaper. Again, an external MIDI keyboard, or internal signals can control the pitch.

– A dual lo-pass gate, which can function as a low pass filter, or as a VCA, or a combination of both. This has a number of routing possibilities as well.

– There’s also a random voltage source, which can be controlled from several sources, and which produces different random signals from each of its four white output jacks in the patch panel.

The patch panel itself is very cleverly designed. It’s color-coded: black jacks are control inputs, all the other colored jacks are control signal outputs. They match the color of the controls of the modules. So a blue jack is an output from the sequencer, an orange jack is the envelope generator output, a yellow jack is the pulser output, purple is aftertouch output, and white are the outputs from the random generator. Having all the jacks together in one place makes for a very neat and well organized patch bay. A single output can be routed to three inputs. But only one jack at a time can go to an input.

Below that is the keyboard, which has a number of controls – a clock output, which can sync to host, or run freely; a portamento control; an arpeggiator with a number of features, and a preset voltage source which can be added to the output of the keyboard, for transpositions or other uses. The keys can input into the oscillators with the keyboard on/off switches on the oscillators, or you can take a key follow output jack in the MIDI connections panel and direct the keyboard output to any control input you want.

Accessed by the two downward arrows control at the top right is a page of control generators that were not included in the original machine. There are four pages here, called “Left Hand,” “Right Hand,” “Gravity,” and “Effects.” “Left Hand” allows you to set up five different control patterns (by drawing with the mouse) which each can have different speeds and different control ranges set. Right Hand is a polyphonic step sequencer. Gravity is a very clever XY game-like controller, which allows you to set up a pattern of movement on an XY grid and use the movement of the puck as a source of controls for different parameters. Any parameter on any of the modules can be controlled by the Left Hand and Gravity generators, with any control range set. The final Effects page, gives two simultaneous effects, one for each of the two output channels. The Gravity controller is shown in the first picture below; a typical Left Hand drawn pattern is shown in the picture below that.

Combining all these controls is what this synthesizer is all about. I’ve used it as a VST plugin in both AudioMulch and Plogue Bidule; its performance has been completely smooth, and it has integrated as part of a larger system (I was using GRM Tools and Melda effects) absolutely flawlessly. Trying to get very clever control patterns to produce constantly changing appealing sounds is the name of the game here. Since getting this machine, I’ve been spending a lot of time patching it, assembling different kinds of control setups with it. I’ve been using a Korg nanoKEY Studio controller, which has velocity sensitive keys and a number of knobs and an XY controller, and I’ve barely scratched the surface of the kinds of complex patches that can be set up with both external MIDI controllers as well as the internal patching controls. The Arturia Buchla Easel V is a very well put together synthesizer, which has the capabilities of the original synth, as well as a whole set of new controls. I’ve had a lot of fun operating it, and if you’re the type of person who enjoys exploring a music making system with great power and flexibility, I think you will have a lot of fun as well. The sound exploration legacy of Donald Buchla lives on in this very cleverly put-together machine. 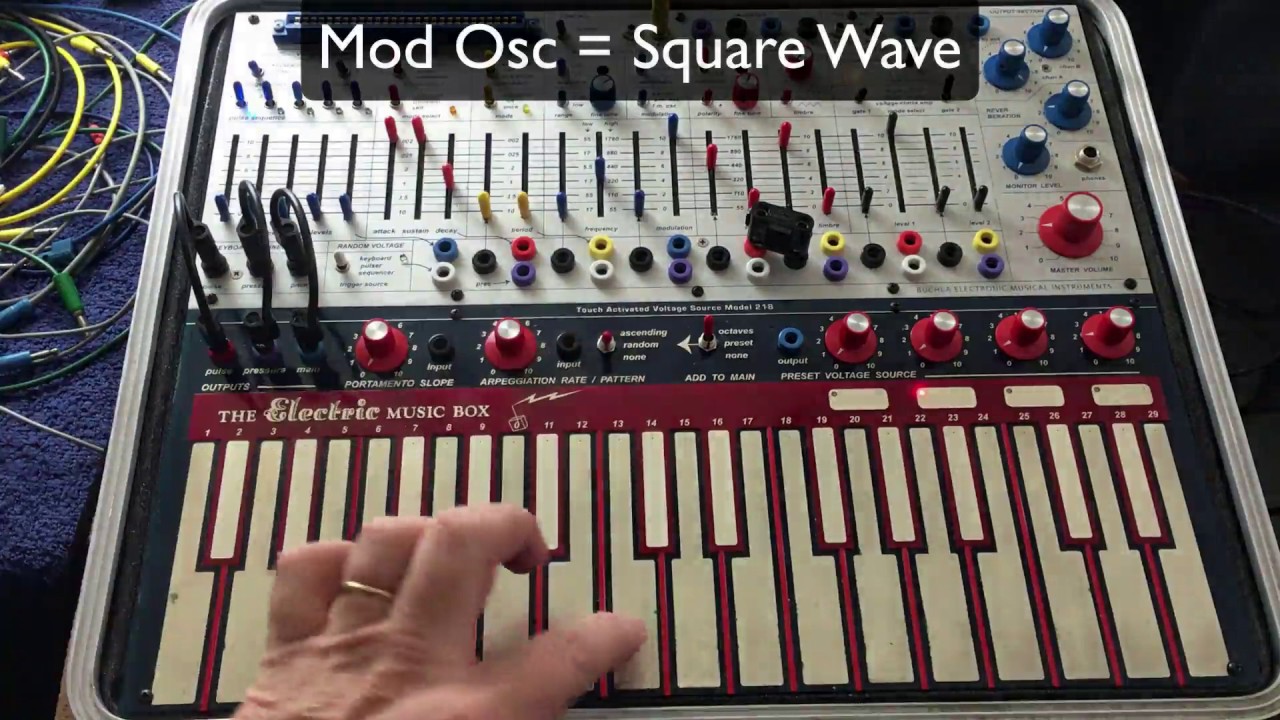 6000 keyboard sounds, 170 drum kits, 17 software instruments, considered a milestone in the music industry, V Collection is a solution for professional musicians who value quality and time. You will find synthesizers, organ, electric piano and string machines in this amazing collection of 12 instruments. You will get not only the precisely recreated nature of the sound of these legendary devices, but also a similar user interface that has made and has made them leaders in the studio and on the stage for many years.